In the midst of a strife-torn world divided by racism, antagonism, sexism, class-schism, political conflict, war, and ideological disparity, what is really needed is the reproduction of vibrant, healthy churches. The church is God’s means of shining the light of truth into this dark and dying world. It is His means of proclaiming the message of reconciliation. The church gives evidence that mankind can be set at peace with God and one another. This world needs more churches! 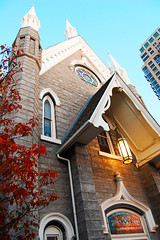 But there is no actual command in the Scriptures to “go and plant churches.” Instead the Great Commission is to “go and make disciples.” Matthew 28-19-20 however doesn’t simply end with, “make disciples.” It commands us to baptize and teach them. In the New Testament, baptism was a clear declaration of identification with a worshipping community. Acts 2:41 says, “So those who received his word were baptized, and there were added that day about three thousand souls.” What were these believing and baptized people “added” to? They were added to the church. These conversions didn’t result in individual believers floating through life on their own. They were gathered into a new community to learn and grow together. Acts 2:42 says, “They devoted themselves to the apostles’ teaching and fellowship, to the breaking of bread and the prayers.” The fulfillment of the Great Commission is tied directly to the formation of new churches. Wherever the gospel is spread, the natural result should be the assembly of believers into new church congregations. [1]

Churches are the organic product of the gospel at work, and that is not by happenstance. It is all part of the grand design. The church is God’s plan to extend his gospel of grace to the whole world. It is his “Plan A” and there is no “Plan B.” Nothing else – not crusades, radio broadcasts, campus ministries, mercy endeavors, educational institutions, or cultural renewal programs -- will have the consistent redemptive impact of the church. We need churches. [2]

In 1820, there was one church for every 875 Americans. In the eyes of many Protestants, this was not nearly sufficient, so from 1860-1900 church planting boomed. Even though the population continued to grow, by the turn of the century there was one church for every 430 Americans. At that time, nearly one-third of all the congregations in the U.S. were less than 25 years old. [3] These young churches reached into people’s lives and effected a shift in the religious landscape. The percentage of the country’s population involved in the life of the church and identifying themselves as “religious adherents,” rose steadily from 17% in 1776 all the way to 53% in 1916. [4] Did you catch that? More than half of Americans were in church on Sundays. What has happened over the last one hundred years? How did we go from 53% of Americans being church-goers, to the disgrace we face today? Now, less than 18% of Americans go to church on any given weekend. [5] Could it be that our churches have become old and stale? Could it be that our churches have lost a zeal and vision for the creation of healthy new churches?

Church historians have noted that after World War I church planting in the U.S. plummeted. Towns across the country had their church and felt no need for additional ones. Turf wars began.There was resistance from older congregations to any new churches beginning in “their neighborhood.” Unfortunately the vast number of congregations peaked in size in the first 25 years. [6] They either remained at that size or slowly began to shrink. So as time passed, the American population continued to grow, while church planting stalled, and current congregations shrank.

What needs to happen now? New churches need to be planted across the U.S. Timothy Keller put it succinctly, “The vigorous, continual planting of new congregations is the single most crucial strategy for the numerical growth of the Body of Christ and the continual corporate renewal and revival of existing churches.” [7] It makes sense when you think about it. New churches best reach new generations, new residents, and new people groups. [8] McGavran and Hunter have demonstrated through dozens of studies that the average new church gains 60%-80% of its new members from people who are not attending any prior church, whereas churches over 10-15 years of age gain 80%-90% of new members by transfer from other congregations. [9] New churches best reach the un-churched, and not only that, they simply grow faster. Research has shown that churches that are fewer than 100 people in size grow twice as fast proportionally than churches with 100-200 people. This would suggest that our country could be reached better if our strategy was planting lots of smaller churches rather than growing fewer large ones. [10] It is time for a resurgence of church planting in the U.S.

Some may say, “We’re not ready,” or “We’re not organized enough,” or “It won’t work.” There is such a thing as an ill-conceived or poorly planned church plant that is damaging in its effects. But there is also such a thing as a stagnant Christianity that isn’t prepared to risk its comfort for the sake of growing the Kingdom of God. [11] It’s time to step out in faith. It’s time to spend and be spent for a cause greater than ourselves – His church. So why plant churches? Because it is the only wide-scale means of bringing lots of new Christians into the Body of Christ in a permanent way. We need churches, new ones.

Church planting can be about a great many things these days. It can be about trendy congregations. A man moves to a hipster part of town, buys black plastic-framed glasses, grows a soul patch, gets a cool tattoo, and wears punk T-shirts with frayed jeans. He renovates a warehouse, pumps in loud music and sits on a stool while he talks. His church is filled with 20-somethings and when the service is done, many of the congregants go to local brew-houses and talk theology. Church planting can be about trendy congregations. [12]

On the other end of the spectrum church planting can be about traditional congregations. A man moves to wealthy suburb, wears a suit with a striped tie, sings with great vibrato, and regularly lauds his Christian alma mater. He sets up an organ on the left and a piano on the right behind which are the Christian and United States flags respectively. The congregation is filled with graduates from the pastor’s college, some older folks, and a few young families. He preaches from a certain Bible, and the people sing from a certain hymnal. This church plant is all about traditionalism.

But let me ask you something - should church planting really be about trendy or traditional? Should its focus be niche marketing? Is the big picture all about tailoring goods and services to the tastes of certain people? I would suggest that church planting shouldn’t be about any of that. Church planting should be about establishing healthy congregations that increasingly reflect God’s character as revealed in His Word. [13] Congregations that listen to God and obey him may differ in certain aesthetics, but at their core they will be healthy. That health will be seen in several shared ways.

Healthy churches will seek to exalt God above all else. Their all-encompassing goal will be to magnify him in public and private worship. Healthy churches will find their center of gravity in Christ. They will live and proclaim the good news that Christ died as an atoning sacrifice, was buried, and rose again to conquer sin and death. Healthy churches will strive to submit to the controlling influence of the Holy Spirit. They will demonstrate prayerful dependence in decision-making, spiritual leadership, communication, and service. Healthy churches will intentionally try to be saturated with Scripture. Their preaching, teaching, and counseling will be anchored to the Word in recognition that it alone is what is necessary for life and godliness. Healthy churches will be gospel-centered in evangelism and discipleship. They will proclaim the gospel, live it out, and give evidence to its truth by love and service to those inside and outside the congregation. [14] Healthy churches will foster a community of brotherly love. They will freely and responsibly love one another through sacrifice, words of truth, burden bearing and accountability. Finally, healthy churches are strategically structured toward multiplication. This happens on a micro-level with attempts to disciple disciple-makers. It happens on a larger scale by incorporating church reproduction into the DNA of the congregation. A healthy church is not simply a church. It is a church-planting church. [15] We need churches – new ones, but not just any kind of new church will do. We need healthy new churches. 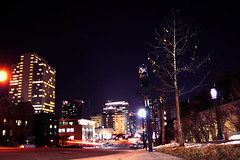 The greatest missionary in history was the apostle Paul. As you read through Acts and note his strategy it was pretty simple. He went into the largest city of the region (cf. Acts 16:9, 12) and then planted churches in that city. Roland Allan states it clearly, “All the cities, or towns, in which he [Paul] planted churches were centers of Roman administration, of Greek civilization, of Jewish influence, or of some commercial importance.” [16]

Cities are not the only places where churches are needed, but they are perhaps the most strategic places where churches are needed. If you want to permanently influence a country, it must be through its chief cities. The most recent census data indicates that more than four-fifths (83.7%) of the U.S. population in 2010 lived in the nation’s metro areas. Cities are where people are and will increasingly be. Cities are centers of influence culturally, spiritually, and in nearly every other way. Cities are the gateway to suburbs and rural areas.

In spite of the Pauline model and practical rationale, cities have largely been neglected by church-planters. It has been that way for a long time. Baptist pastor and president of Brown University, Francis Wayland, wrote more than 150 years ago, “I come now to the case of churches in cities… They are, in comparison with the churches in the country, few in number, and they contain but a small portion of our entire membership.” [17] His voice from long ago resonates with the current need for churches to be planted in cities. Once again Wayland wrote, “[Cities] are composed, in a considerable degree, of the wealthy and the more highly educated. They have in their power vast means of doing good… The manners, the maxims, the opinions, the practice of cities, are always rapidly carried into the surrounding country. They are the centers of influence, by which the character of the circumference is determined.” [18]

Plant for the Gospel is committed to seeing this happen by God’s grace. Jesus said, “I will build my church.” We long to be his servants in this task. The first target is Salt Lake City, Utah.

by Plant for the Gospel

This email address is being protected from spambots. You need JavaScript enabled to view it.